This is a very busy time here at Earth Pyramid HQ. We are still in the process of selecting a suitable piece of stone to start carving the first facing block but work on the actual work area is fully underway. The site has now been cleared and we are in the process of setting out the various test areas. We are dividing the site into 2 separate zones. 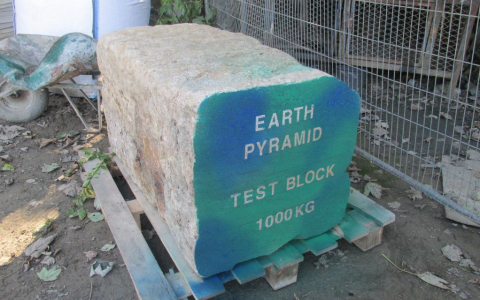 Zone 1 will be a covered area where we will be carving the first facing block using a mixture of various techniques.

Alongside this work we will also be testing out some theories on how the carving may have been done. One of these involves submersing a piece of stone into a tank filled with water to see (A) if the water keeps the stone softer and more workable and (B) to see if you can use the water level as a guide for cutting a straight edge.

We have taken this idea from Chris Massey’s theory:

The idea of using water to keep the stone workable is very valid as stone is easy to work when freshly quarried but becomes harder to work over time. This experiment will be small scale but should still give us an idea of its possible use in the project.

In Zone 2 we will be attempting to test some of the theories regarding how large pieces of stone were moved. As we hope to build the Earth Pyramid with a mixture of ancient and new technology we thought it only right that we attempted to gather these theories together to discover the most plausible techniques for the build.

The first theory we will be testing comes from students at Indiana State University who have developed a technique for rolling the blocks.

Professor Joseph West From Indiana State University will be guiding us through his students theory and we will be documenting the whole process.