Writing for Science on NBC News, Natalie Wolchover asks how much would it cost to build the Great Pyramid today? Natalie interviewed architect Jean Pierre Houdin, who is involved in the Earth Pyramid project.

There are no plans to build a full-scale Great Pyramid, but a campaign for a scaled-down model is under way. The Earth Pyramid Project, based in the United Kingdom, is raising funds to erect a pyramidal structure in an as-yet-undecided location, built of stones quarried all around the world. It will contain a time capsule, to be opened 1,000 years from now.

Funded by governments and organizations around the globe, the Earth Pyramid will not only provide a window into contemporary culture for future societies, it will also serve as an opportunity to test Houdin’s construction theory of the Great Pyramid of Giza. 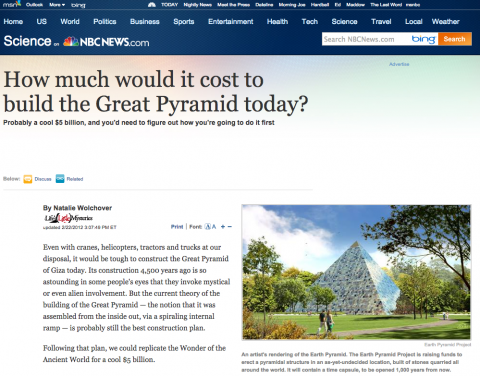 “I am quite sure we could do the same today, and it would be the most economical method,” Jean Pierre Houdin.