Putting the World in a Box 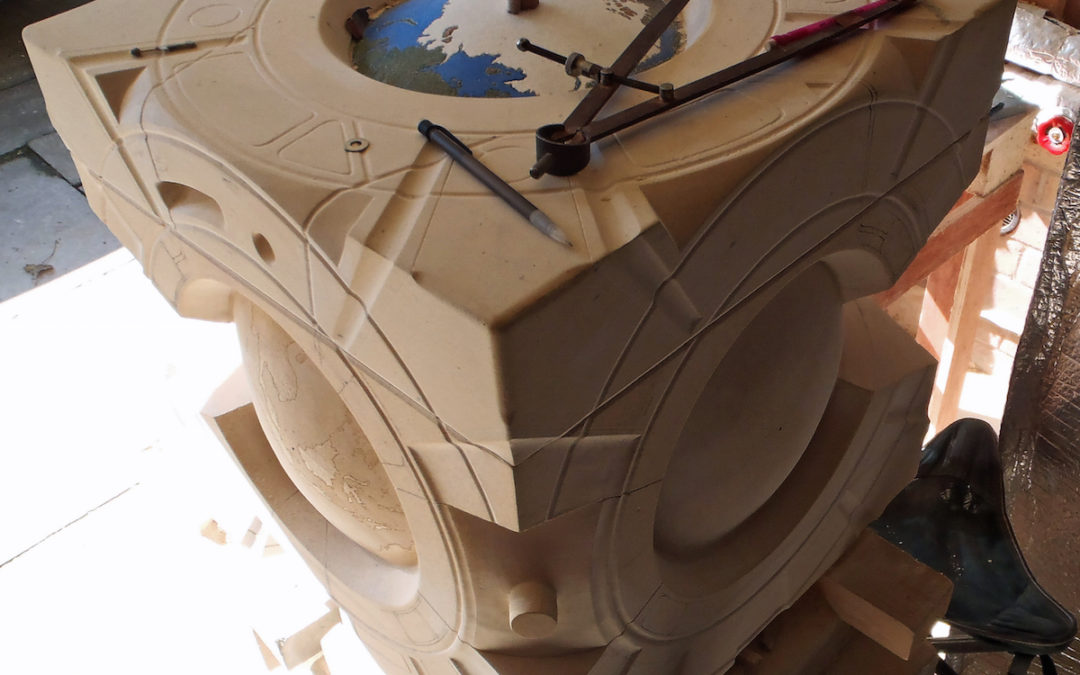 Work on the carved stone Time Capsule for the Earth Pyramid project has now entered a phase where surface detail is being applied to communicate a pictorial message to its eventual discoverers. Pictorial because the language of those future archaeologists can hardly be guessed at.

Revealing the continents of the Earth

The globe has now been revealed on five faces of the cube, giving the impression of a separate sphere within the cube. These are the Polar, African, Indonesian, Pacific and American reveals. Cartouches are being carved into the circular facets which frame the revealed sections of the Earth and these will indicate the location of other pyramids in those regions. 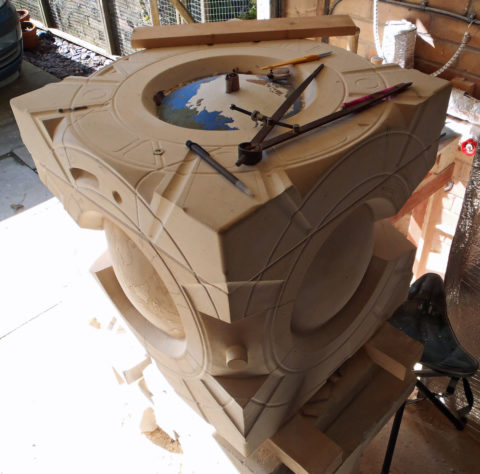 Colouring the globe within the faces of the Earth Pyramid time capsule.

As the work on the cube has progressed each new feature has given rise the the need for yet another as each detail serves a purpose and fits into the logic of the cube’s function. Some sections of the cube form have been delineated with deeply incised lines to give the appearance of segmentation which is a recurrent motif in this work. One new feature is the thousand-year-meter which is a small triangular opening onto a hypothetical dial marked with all the years of a millennium. Even with the dial’s 500mm diameter each year is necessarily a very tiny mark. The general theme of the work relates to time which is appropriate given that it will endure a millennium of time within the Earth Pyramid.

Progress on the Time Capsule Cube was recently the subject of a film made here at the workshop in Yorkshire. Simon, Liam and Steve Ward of the Earth Pyramid project used a combination of technical and creative skills to produce the short video which shows the cube as it nears completion.

Adding colour to the globe

Another change has been to colour the globe. The initial design was for a simple stone sphere. However it was felt that it would be a shame not to represent the beauty of the Earth which is, after all, far more than just a rock orbiting the sun. The continents and islands are carved into the stone sphere and the land masses and features given texture. The colouring is simple and, like any globe, is more like a map than a portrait of the Earth.

So what is the message on the cube surface?

The next blog will give full details with photos.