Voices of the Past Speak to Future Generations

Jeff Guin from Voices of the Past was kind enough to interview Steve to help spread the word for our cause. The Earth Pyramid: Giving the world a chance to become a part of history

Although ambitious, the venture has gained the support of Nobel peace laureates Archbishop emeritus Desmond Tutu and President José Manuel Ramos-Horta as well as having 25 governments interested in participating. 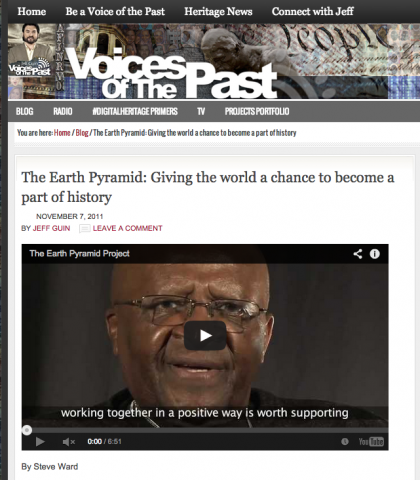 Creating a new pyramid (at 50m high) is obviously a lofty goal but French architect and pyramid expert Jean Pierre Houdin has lent his support and advice to the project and the whole venture is starting to gather support from leading experts within the construction industry. Building the pyramid using a mixture of ancient and new technology will make for a fascinating build and go some way to answering the many questions that still exist regarding how the great pyramids were built.

Read the article in full: The Earth Pyramid: Giving the world a chance to become a part of history

Be sure to drop by Jeff’s Voices of the Past YouTube channel too!