An EPIC site for the Earth Pyramid has been found!

The location for the Earth Pyramid’s construction has now been finalised.

The Earth Pyramid idea started seven years ago with the aim of creating a focal point for the promotion of global citizenship and a hope of connecting a generation of the world’s children. We are pleased to announce that the Earth Pyramid has now linked with Matrix Global Schools who have created an exciting new concept in education that complements the project’s aims. At their state of the art facility in Malaysia Matrix has developed EPIC (Earth Pyramid Incubation Centre) where children from around the world will be encouraged to submit ideas on how we can nurture the theory of global citizenship. The Earth Pyramid will create the focal point for global participation and the funds raised by the venture will be used to promote, develop and implement these ideas through EPIC.

On the 26th-28th of July 2015 a conference is being held at Matrix Global Schools will site to Launch EPIC and details of the event can be viewed in the Earth Pyramid launch flyer below. 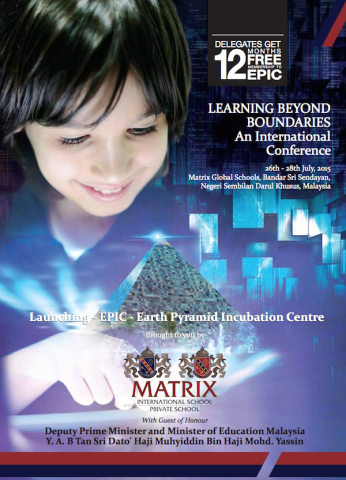 Over the next few weeks we will be releasing further details of this new development and will introduce you to the people / organisations who are driving the Earth Pyramids success.